WeedWiki
Register
Don't have an account?
Sign In
Advertisement
in: Pages with some Wikipedia text, Cannabis foods

Bhang is a preparation from the leaves and flowers (buds) of the female cannabis plant, consumed as a beverage in India.[1] 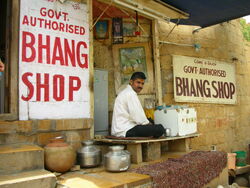 Bhang has been used as a cheap intoxicant for centuries. Bhang in India is distributed as a religious offering during Shiva festivals like "Mahashivratri". It has now become synonymous with the Holi festival, to the point where consuming bhang at that time is a standard practice. It is also available as Bhang golis (balls) which is just freshly ground hemp with water. Apart from this, sweetened bhang golis are also widely available. These are not considered a drug, but a traditional sleeping aid and appetizer. Bhang is also part of many ayurvedic medicinal preparations, i.e. bhang powder is available at ayurvedic dispensaries throughout the country.

Bhang Ki Thandai also known as Sardai is a drink popular in many parts of sub-continent which is made by mixing bhang with thandai, a cold beverage prepared with almonds, spices (mainly black pepper), milk and sugar.

Bhang was first used as part of the Hindu rite in India around 1000 BC and soon became an integral part of Hindu culture. The herb was devoted to Lord Shiva on Shivratri, a Hindu festival.

Sadhus and Sufis use Bhang to boost meditation and to achieve transcendental states. Bhang or cannabis is also used amongst Sufis as an aid to spiritual ecstasy.

The nihang sect of the Sikh community are one of the consumers of bhang and in their terminology, it is called Sukhnidhan.It started as an ayurvedic medicine wherein, the main use for the Nihangs was to aid in reducing pain from battle wounds, and digestive assistant. [2]

The tradition of consuming bhang during Holi is particularly common in North India where Holi itself is celebrated with a fervor unseen elsewhere.

Bhang is heavily consumed in Mathura, an ancient town of religious importance to the Hindus. Here the practice is believed to have been introduced by the followers of Lord Krishna and has stayed over since. They begin the preparation by Sanskrit chants and recitation of prayers to Lord Shiva. Some people from Mathura take Bhang to work up their appetite while others do it to relieve themselves of stress. But the hub of bhang use is Varanasi or Banaras, the Land of Shiva, where the bhang is prepared on its famous ghats.

Anywhere on the ghats, one can find large number of men engaged in the process of preparing bhang. Using mortar and pestle, the buds and leaves of cannabis are ground into a green paste. To this mixture milk, ghee and spices are added. The bhang base is now ready to be made into a heavy drink, thandai, an alternative to alcohol; this is often referred to casually, if inaccurately, as a "bhang lassi" (lassi being a better-known and similar drink). Bhang is also mixed with ghee and sugar to make a green halva, and into peppery, chewy little balls called 'golee' (which in this context means candy or pill in Hindi).

In Pakistan-administered Kashmir, a common preparation for bhang consists of first boiling the leaves and flowers of the female cannabis plant for a short time. Once the plant matter has become soft, it is mixed with khas khas or white opium poppy seed. The two ingredients are pulverized with a mortar and pestle for 30-60 minutes (adding a few drops of water now and again to keep the paste moist). The paste is then mixed with water by hand and the mixture is poured through a straining cloth to remove all excess plant matter. The remaining green water is known locally as "bhang" and consumed as is. The usage of oil-rich seeds allows THC, the fat-soluble psychoactive chemical from the cannabis, to be extracted into the poppy oil so that potency can be retained in a water-based mixture.

Being so ancient, bhang has become an integral part of Indian tradition that it has become symbolic for many things.

It is associated with Lord Shiva, as the cannabis plant is regarded as holy by Hindus.

In some sections of rural India, people believe in the medicinal properties of the cannabis plant. If taken in proper quantity, bhang is believed to cure fever, dysentery and sunstroke, to clear phlegm, quicken digestion, appetite, cure speech imperfections and lisping, give alertness to the body.[3]