Canada's murder rate is 1/3 the US rate. Handguns per household by country

Share link: handguns per household. This article was written by Timeshifter.

Canada has far fewer handguns. And a much better healthcare system (single payer) than the US. 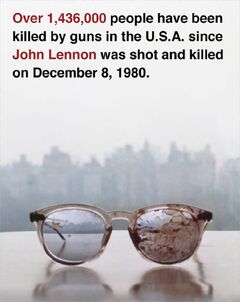 22% of US households with handguns[]

GunPolicy.org - Guns in the United States — Firearms, gun law and gun control. See the many references at the end of that page. See the data below by looking at the "Gun Numbers" section of the page, under "Civilian guns" and then under "Proportion of Households with Handguns": "In the United States, the percentage of households with one or more handguns is reported to be". It has more years than is copied below.

2.9% of Canadian households have handguns[]

GunPolicy.org - Canada — Gun Facts, Figures and the Law. (Archived here). From the "Gun Numbers" section of the page: "In Canada, the percentage of households with one or more handguns is reported to be": 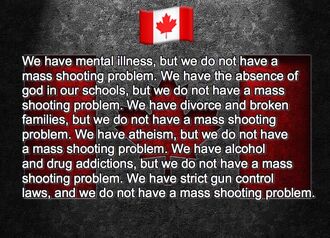 Most US firearm deaths are from handguns[]

In 2011, 72% of the 8,583 homicides committed using firearms in the United States were committed using handguns. See: Expanded Homicide Data Table 8 - Murder Victims by Weapon, 2007-2011. By the FBI (U.S. Federal Bureau of Investigation)

Guns are responsible for the largest share of U.S. homicides in over 80 years, federal mortality data shows., By Christopher Ingraham. April 2, 2018. Washington Post. "All told, in 2016 gun homicides made up 74.5 percent of all homicides in the United States — the highest share in well over 80 years of complete federal data."

Handguns per household by country[]

For a more complete table see Wikipedia: Percent of households with guns by country.

Nearly all of Western Europe bans or severely restricts handguns. Rifles and shotguns are legal to own. The murder rates are much lower than in the USA. See Wikipedia:

Homicide rate is higher in the USA[]

Canada has a much lower murder rate. See: 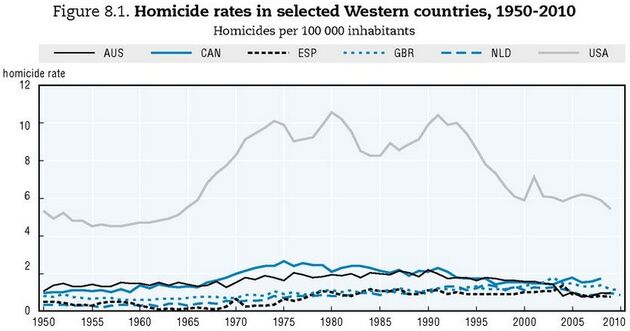 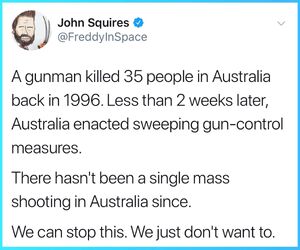 Percentage of homicides via firearms[] 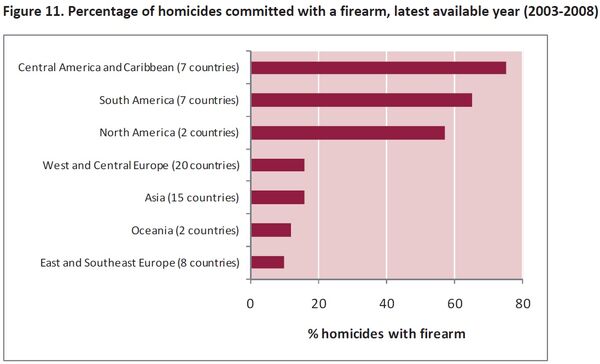 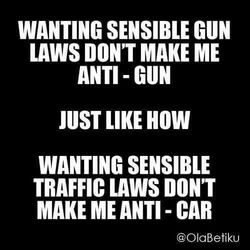 Return to top. See above chart for household possession of firearms and handguns by country.

The NRA refuses to acknowledge that countries with low rates of handgun ownership have much lower murder rates. Only nationwide handgun restriction works well.

The statistics do not show the terror and post-traumatic stress of living in the war zones where many urban high schools in the USA are found.

"We spent five months at Harper High School in Chicago, where last year alone 29 current and recent students were shot. We went to get a sense of what it means to live in the midst of all this gun violence, how teens and adults navigate a world of funerals and Homecoming dances." 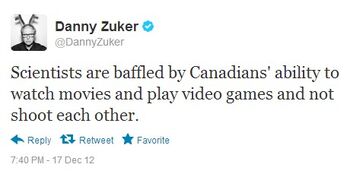 Handguns and epic violence against women[] 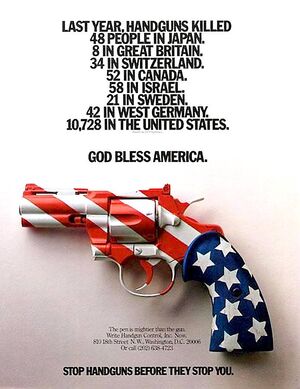 Republican disinterest in women's rights, a sexual predator as President. By the way, pepper spray teargas is very effective. Keep a small one in your pocket.

Handguns are not the way to go. Homicide rates are much lower in nations that have blocked most handgun ownership. See Wikipedia: List of countries by intentional homicide rate.

20 Jan 2020: Crisis Boils Over as 28th Native Woman Vanishes. Yahoo News and New York Times: [98]. Read the comments. Some of the early facts may be wrong. But the overview of the issue is correct.

Article linked below covers it: Epic violence and domestic violence against women in these poor areas, tolerance of this violence, lack of statewide task forces, drug war, corrupt cops, good-ol-boy local police unchecked by state and federal authorities.
13 Jan, 2020: How Far Can Abused Women Go to Protect Themselves? The New Yorker.

High-capacity magazines should be banned[]

High-capacity magazines for rifles make some sense, but not much, in making the Second Amendment to the United States Constitution more effective as a bulwark against tyranny. But they cause far more damage in mass shootings. They should be banned. Both for handguns and long guns. See this article explaining why a single rifle shot is so much more deadly than a handgun shot:

The proliferation of handguns is far more important in causing higher murder rates than long guns. Getting rid of handguns is what is necessary. Rifles and shotguns do not need to be banned. An "assault rifle" that is legal in the USA is just a semi-automatic rifle. Many hunting rifles are semi-automatic.

Fully-automatic rifles (machine guns) are no longer legal in the USA for the most part.

Handguns are laughable weapons for defending against tyranny. They should be banned since most murders in the USA are committed with them.

For more info and points of view:

Bump stocks should be banned[]

The Republican Party (GOP) and the NRA are responsible for mass incarceration, and removing rifles and voting rights from millions of drug users and non-violent felons across the United States. See: Can Convicted Felon Purchase or Possess a Firearm?.

The evil history of the US Senate filibuster, or why the US no longer has simple majority rule. [113].

US middle-class wealth has collapsed. [115]. See chart below.

Middle class wealth collapsing. [116]. And: Just 8 men own same wealth as half the world. See Wikipedia: Wealth in the United States.

Medicaid, Medicare, Social Security all came from Democrats. You pay the taxes while healthier. Republicans prefer you die. 50% in U.S. Fear Bankruptcy Due to Major Health Event. [118]