"The ballot measure directs police and prosecutors to make 'marijuana or cannabis offenses … the lowest enforcement priority of the City of Tacoma.' After final ballot tallies Tuesday night, I-1 was coasting to approval, winning close to 65 percent of the vote. ... Supporters point to Seattle when contending Tacoma can de-emphasize enforcement of marijuana offenses even more than they do now. Since City Attorney Pete Holmes took office in 2010, pot prosecutions have dropped from 90 cases in 2009 to just one over the past 23 months. Tacoma prosecuted 463 marijuana cases in 2010 and 159 so far in 2011."

"Welcome to America, home to 5% of the world's people & 25% of the world's prisoners." NAACP, ACLU File Lawsuit Against City of Philadelphia for Rejecting Criminal Justice Reform Ad. Article by NAACP. Lawsuit filed October 19, 2011 during the period of the Occupy movement. Also see the ad banner article by Courthouse News Service. The drug war and prisons are big business, and a big part of how the 1% controls the 99%. See Facebook comments about the banner. The Republican Party leads the racist drug war.

Incarceration peaked in the USA in 2008. <<--See that article for sources, stats, and charts for the banner. Most inmates are incarcerated due to the drug war.

Waking up to the new fascism. See the NAACP page about ending the drug war.

NAACP’s paradigm shift on ending the Drug War in The Miami Herald. See: Race, ethnicity, and the drug war.

Jimmie Carter: Call Off the Global Drug War, in June 16, 2011 New York Times. Excerpt: "Former California Gov. Arnold Schwarzenegger pointed out that, in 1980, 10 percent of his state’s budget went to higher education and 3 percent to prisons; in 2010, almost 11 percent went to prisons and only 7.5 percent to higher education. Maybe the increased tax burden on wealthy citizens necessary to pay for the war on drugs will help to bring about a reform of America’s drug policies." See more on the costs of the drug war, including the cost of police and courts.

Besides the many marijuana marches held, or attempted, throughout May in Brazil, there were 40 more marches Saturday June 18 after the Supreme Court ruling June 15 legalizing marijuana rallies under freedom of speech. For more info: Brazil. Cannabis-related links.

"Brazilian demonstrators held marches on the weekend calling for marijuana to be legalized after the country's top court ruled the gatherings could go ahead in the name of freedom of speech. The demonstrations were held in 40 towns and cities late Saturday, according to Brazilian media. Most were small affairs, with around 2,000 marching in the country's megapolis of Sao Paulo. Some people were seen smoking marijuana, but there were no immediate reports of arrests. Possession and use of marijuana remains illegal in Brazil, and some commentators and social groups said they saw the marches as violating a law on justifying crimes. But Brazil's Supreme Court last Wednesday ruled that the right to freedom of expression was more important and the marches could be held -- but that illicit drugs should not be consumed. Last month, when protesters tried to hold a pro-marijuana rally in Sao Paulo without judicial support, the march degenerated into clashes with police who fired tear gas to disperse them."

See: Women for Schapelle: Schapelle Corby - Public Flyer. See also: Birthday Girl's Global Day of Action . . . July 10th. List of many Facebook groups. Her mental health. Vital links. Right-click the flyer to the right to fully enlarge it, and to read it.

Event graphics: See the linked pages and Category:18 Joint France event graphics. Right-click an image to get to the info page, and to enlarge it further. 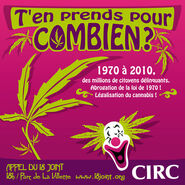 "The Hash Bash in Ann Arbor is the Nation's oldest marijuana Rally." [2]. There have been other cannabis rallies in the USA before 1972, but they haven't continued on for as many years. Info follows from Hash Bash (Wikipedia): The first Hash Bash was held on Saturday, April 1 1972 in response to the March 9th 1972 decision by Michigan Supreme Court declaring unconstitutional the law used to convict cultural activist John Sinclair for possession of two marijuana joints. This action left the State of Michigan without a law prohibiting the use of marijuana until after the weekend of April 1 1972.

"It is almost a decade since the first cannabis derivatives trade fair was held in Germany. Since then, the growth of trade fairs dedicated to cannabis in all its applications, whether direct or derived, has been on the rise in Europe. So much so that for the last six years, Spannabis trade fair has been a highly popular event in Barcelona, and Expocannabis is following its steps in the capital of Spain, Madrid.

"The trade fair conditions offered by the Spanish capital are unbeatable due to its population density and its geographical situation, equidistant from almost any point of the Peninsula. The first edition was acclaimed by the public and the exhibitors, and this year we can proudly say that we expect an even bigger success. We count on you. You can't miss it!"

Wikipedia: Mexican Drug War. Click image to enlarge. There are many brutal civilian deaths of people on all sides, police and right-wing deaths squads, fear, and a police state in many senses of the word. More info.