GMM (years signed up. Google site search is no longer working well. It only finds a few yearly city lists containing a city name.
Special:Search works. Add city name, and state/province/nation as needed. This will pull up all years in which the city is listed here on Wikia through 2012. For more years go here. See also: 4/20 event lists. This city participated or signed up one year (or more) for the Global Marijuana March (GMM), or the Million Marijuana March (MMM).

The Columbus Ohio Chapter of the Million Marijuana March will have it's 14th Annual Meeting at 4:20 PM, on Sat. May 5, 2012. We will meet at the NW corner of the intersection of N. High St, and W. 17th Ave, (Near OSU) in Columbus Ohio.

The PLAN is to march down the SIDEWALK along N. High St, to BUTTLES AVE in the Short North. We will turn at Buttles and go to Goodale Park, where we will disband.

Please wear bright colors, so that we will look good on TV.

The march will end in time for people to attend the monthly GALLERY HOP that will be starting about the same time we are ending. 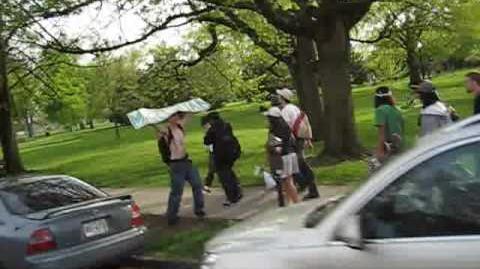 Saturday May 6, at 4:20 the Million Marijuana March converged at north high street and 17th avenue. The estimated size of the crowd was fifty people. A strange odor emerged from the crowd. Protesters showed their utter disregard for the law by smoking joints throughout the event. Local police occasionally swung by the march, as it went down high street. The only cop on hand was a man with a camera claiming to be doing a documentary at Ohio University. Indymedia has already heard this excuse from Columbus Police. There was little doubt about the identity of the photographer, when he began taking point-blank pictures of the faces of people smoking on the sidewalk.

After a brief speech the march began down high street into the gateway center. Chants ranged from "Fuck the gateway center" to "no more drug war" and "marijuana, yes I wanna." Bystanders, on the street, seemed supportive of the cause. Leaders of the march slowed the crowd at local businesses, who support Hempfest and the Hempfest Journal. The march was suspiciously slow throughout the day. The crowd filed through Short North's Gallery Hop and ended with another smoke-in at Goodale Park.

The Million Marijuana March has been going on globally since 1998. The purpose of the march is to raise awareness about the positive effects of marijuana usage. Nearly everyone in this country was indoctrinated with a negative, pro-law enforcement mentality about marijuana. Of all the industrialized countries of the world, America is the most draconian in its relentless prosecution of the War on Drugs. Well over 2 million people in these United States are in prison today. Prisons, which are growing increasingly privatized, and increasingly resembling slavery. As one bystander of the march remarked "The War on Drugs is a war on black people."