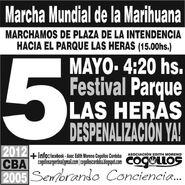 Hi all, we had our march here in the middle of the Argentine mountains in the city of Cordoba. it was our first march, and we had around 500 people that came with their signs and flags. it was very peaceful, and the people were very happy. Never before have we had this kind of event in this city.