This article was written by Timeshifter. Share links: republicans - holywar. See also: Vote out most US Republicans and their cannabis war. And: US Republican states. It's not just cannabis prohibition. And: Happy alternatives to Republican-led poverty, mass incarceration, food insecurity, debt, ill health, intense concentration of wealth, endless wars.

It's not just American Republicans who lead the Reefer-Madness war on cannabis. See:
UK: Prime Minister Theresa May Claimed Cannabis Leads To Heroin And Suicide. By Steve Elliott. May 18, 2017. She is in the Conservative Party (UK).

USA. The state of the nation

Why is everything a "war" or a "crusade" to Republicans? Like the war on drugs. We need cures, not wars. 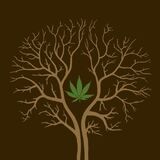 Wikipedia: Tree of Life. A common motif in world mythologies and philosophies.

The American Drug Panic of the 1980s. Chapter 12 of Moral Panics: The Social Construction of Deviance.

"Nashville ... on the cusp of joining the long roster of American cities, including New York, that have decriminalized the stuff. ... The fear in Nashville was palpable once. In October 1980, the city’s police chief, Joe Casey, declared in a front-page article in The Tennessean that marijuana caused people to rob and kill. Anyone caught growing or selling marijuana three times, Mr. Casey said, or selling it to minors once, should be executed." - From this article: Following Its Country Music, Nashville May Loosen Up on Marijuana. By Richard Faussetsept. Sept. 18, 2016. New York Times.

Some Congressmen and police who prosecuted the War on Drugs believe it caused a large increase in the United States incarceration rate. See Law Enforcement Against Prohibition, and large chart with sources. 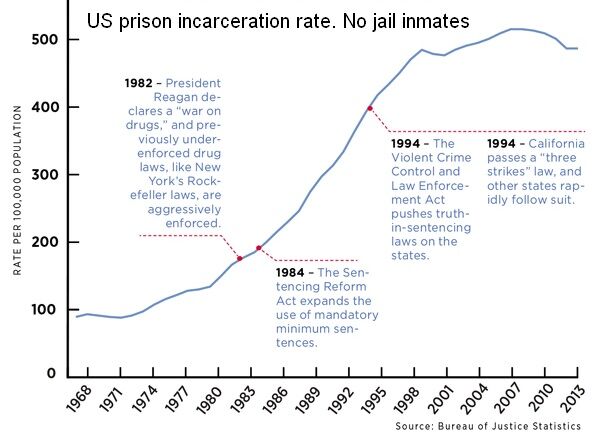 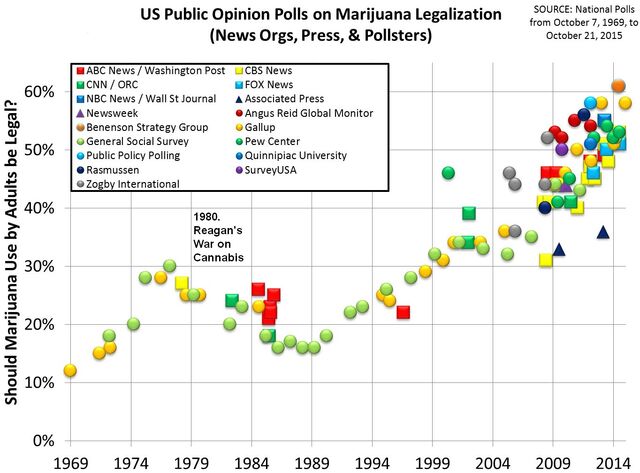 See Reagan's war on cannabis. Above timeline is adapted from one of the charts in this article: 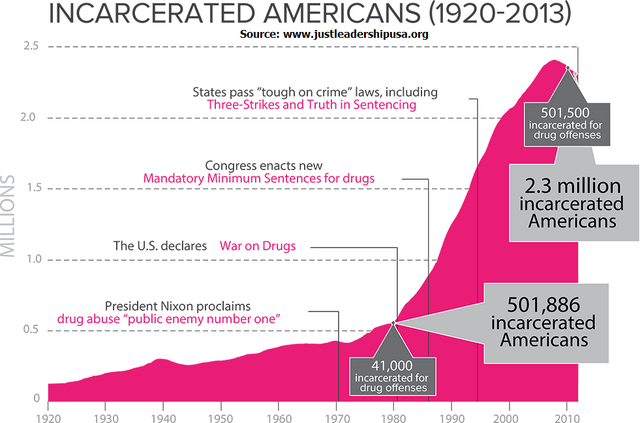 See main article: People in prisons and jails in the USA for drug-related crime.
And: Number of marijuana prisoners in the USA.

The Drug war is the cause of the high U.S. incarceration rate.

Reagan, Drug War, and Trickle Down

The drug war causes the high U.S. incarceration rate, and is part of the Republican war on the poor and middle class. 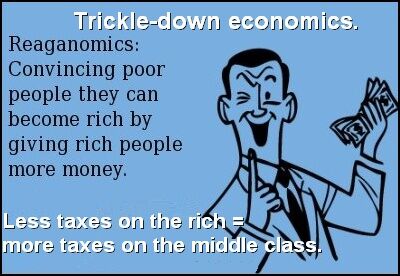 1/3 of Americans have a criminal record

"The FBI currently has 77.7 million individuals on file in its master criminal database—or nearly one out of every three American adults." - Wall Street Journal.

The Republican Party is controlled by the 1%. They need the prison-industrial complex, and a permanent lower class of one third of adult Americans with a criminal record to keep wages low, and to keep people in line.

Articles written before the November 8, 2016 election in the USA:

The American states of Colorado and Washington voted to legalize cannabis, and Massachusetts became the eighteenth state to approve cannabis for medical use. See 2012 vote for cannabis. Prohibition, your days are numbered!

Why did U.S. Republicans get their asses handed to them in 2012? Well, besides their idiotic rape comments, maybe it is because their support for "freedom" was a sham. For example; at the time of the election very few Republicans had cosponsored H.R. 6335 (see section on cosponsors). That bill would not have done anything more to legalize marijuana or medical marijuana; it would simply have allowed medical marijuana centers operating legally under state law to continue to do so. It would have amended the Controlled Substances Act so as to exempt real property from civil forfeiture due to medical-marijuana-related conduct that was authorized by State law.

Of course there are some clueless Democrat incumbents too that need the boot:

Fortunately, it looks like some Democrats are pulling their heads out of Republican asses.

"Earlier this year, the Colorado Democrats announced their support for marijuana legalization in their 2012 party platform. On June 9th, the Texas Democrats endorsed marijuana decriminalization. Last weekend, the North Carolina Democratic Party added resolutions supporting medical cannabis and industrial hemp. ... Also worth noting, on June 2nd, the Washington State Democratic Party built upon their earlier endorsement of their state’s legalization initiative, I-502, by adding support for full marijuana legalization and medical cannabis as planks in their party platform."

Romney on marijuana and medical pot

Quote from the New Hampshire event in late July 2012 (emphasis added): "The idea of medical marijuana is designed to help get marijuana out in the public marketplace and ultimately lead to legalization of marijuana overall. And in my view that's the wrong way to go. ... I'm opposed to it, and if you elect me president you're not going to see legalized marijuana. I'm going to fight it tooth and nail."

Romney Really Doesn’t Want to Talk About Medical Marijuana. Article and video. By Jon Walker. May 11, 2012. Just Say Now. "While in Colorado, local CBS Denver reporter Shaun Boyd asked Mitt Romney about his position on medical marijuana and the candidate was not happy. Romney became visibly upset about the question. He repeatedly interrupted the reporter and chided her for even asking him about it. ... When Romney did finally get around to answering the question he said that he does think marijuana shouldn’t be legal in this country and that he believes it is a gateway drug. ... With 77 percent of the country believing medical marijuana should be allowed Romney is in a tiny minority on this issue. If I were a politician and my position on a particular issue was extremely unpopular, I, too, would hate being asked about it."

"I'm not in favor of medical marijuana being legal". Oct. 6, 2007. In New Hampshire Mitt Romney responds to a man in a wheelchair with muscular dystrophy. Romney refuses to answer the man when asked if he would arrest the man and his doctors. Youtube link. See here for closed-caption version. Don't forget to hit the [CC] button to activate them if you don't have them enabled by default (or click the button for interactive transcripts - it's to the right of the flag button).

Media on Romney and marijuana

Mitt Romney: Marijuana 'For Recreational Use' Is Bad, But I Also Oppose It For All Purposes. By Nick Wing. October 2, 2012. The Huffington Post. A spokesperson said. "He [Romney] opposes legalizing drugs, including marijuana for medicinal purposes. He will fully enforce the nation’s drug laws, and he will oppose any attempts at legalization."

Mitt Romney confronts a cannabis user in the summer of 2011 on the beach in La Jolla, California. See Gothamist article. Romney impersonates police officers in high school and college. Romney leads a pack that forcibly cuts off the long hair of a bullied classmate in high school. See ABC News article, and Washington Post article. See 2007 and 2012 videos from New Hampshire where Romney discusses and opposes medical marijuana.

Photo to the top right: Newt Gingrich at West Georgia College (which later became the University of West Georgia). According to his Wikipedia article Gingrich was professor there from 1970 to 1978. He left when he was denied tenure. The image source says: "That's not Austin Powers dressed for a job interview... it is Newt Gingrich as a young professor at the University of Georgia." Lol. A comment says: "Short sleeved shirt (?) and a suit : not a good look....." 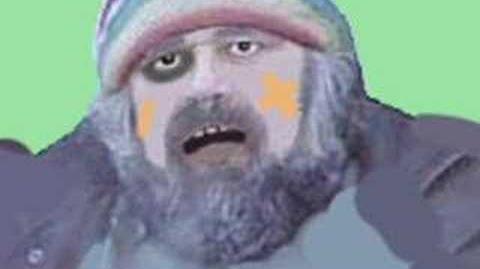 Music video cartoon about our dynamic duo, Dana Beal and Aron "pieman" Kay. Video was created in 2003 (see notice at end of video). The music is by Benedict Arnold & The Traitors. The song "Death penalty for pot" was written in 1981, and recorded around 2002 according to the info on the Youtube page.

See Wikimedia Commons: Category:Government propaganda. Note the "glorious mission" or "glorious war" nature of much propaganda. Like the Republican-led Holy War, the "War on Drugs". See Wikipedia: War on Drugs. It is really a war on some drug users. This particular glorious war was reinvigorated by the cult leaders, Ronald and Nancy Reagan. The B-movie actor Ronald (6) Wilson (6) Reagan (6) is still worshiped like a God (or idol) by some segments of the Republican Party.

The Reagans and Just Say No 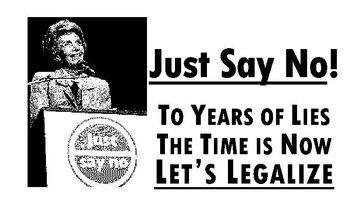