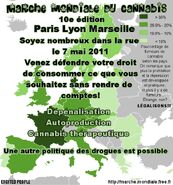 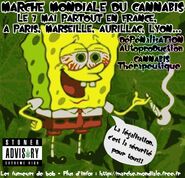 We began the manifestation in "le parc des chartreux" in the first Lyon's district near 16 h. It was raining and we were just between 30 and 40 persons. We put music near 18 h when the sun came back. Near 19h, 70 at 80 were together. We finished at 21 h and we cleaned the park. More and less 200 cannabinophiles passed to support this plant. Our slogan was : "with prohibition, no prevention (safety)". The police stayed far and they didn't come. A local paper, spoke our gathering.

Next year, we try to do something more important. It will be an election year in France.

This Saturday, at LYON (FRANCE), we were more or less 40 people for a symbolic action. A marijuana plant was planted in "jardin des plantes" of LYON. We stayed for 3 hours, we had speech with a lot of people and no policemen came.