Ronald Ernest Paul was born on August 20, 1935 in Pittsburgh, the son of Howard Caspar Paul and Margaret (née Dumont) Paul. His paternal great-grandparents emigrated from Germany, and his mother was of German and Irish ancestry. Paul grew up in the western Pennsylvania town of Green Tree. His father ran a small dairy company.

At age five, Paul worked with his brothers in the basement of the family's home, checking hand-washed milk bottles for spots. As a junior at suburban Dormont High School, he was the 220-yard dash state champion. He attended Gettysburg College, where he was a member of Lambda Chi Alpha fraternity and earned a B.S. degree in biology in 1957.

In 1968, Paul and his wife relocated to Texas, where he continued his medical work. Trained in obstetrics and gynecology, Paul then began his own private practice. As a physician, Paul routinely lowered fees or worked for free and refused to accept Medicaid or Medicare payments. A 2002 newsletter of the Association of American Physicians and Surgeons (AAPS) listed Paul as a member.

As a member of Congress, he continues to refuse to sign up for the government pension that he would be entitled to in order to avoid receiving government money, saying it would be "hypocritical and immoral."

Paul favors the right to use marijuana as a medical option. He was cosponsor of H.R. 2592, the States' Rights to Medical Marijuana Act. He is currently a supporter of the Personal Use of Marijuana by Responsible Adults Act of 2008.

Paul has joined prominent Progressive Democrats in urging that states be allowed to permit farmers to grow industrial hemp, which currently is defined as a controlled substance. He contends that this would help North Dakota and other agriculture states, where farmers have requested the ability to farm hemp for years.

In 2005 and 2007 he introduced the Industrial Hemp Farming Act "to amend the Controlled Substances Act to exclude industrial hemp from the definition of marijuana, and for other purposes"; it currently has eleven cosponsors. This bill would give the states the power to regulate farming of hemp. The measure would be a first since the national prohibition of industrial hemp farming in the United States. The Economist wrote that his support for hemp farming could appeal to farmers in Iowa.

Paul believes in personal responsibility, but also sees inequity in the current application of drug enforcement laws, noting in 2000, "Many prisoners are non-violent and should be treated as patients with addictions, not as criminals. Irrational mandatory minimal sentences have caused a great deal of harm. We have non-violent drug offenders doing life sentences, and there is no room to incarcerate the rapists and murderers."

When asked about his position on implementing the tenth amendment, Paul explained, "Certain medical procedures and medical choices, I would allow the states to determine that. The state law should prevail not the Federal Government." Speaking specifically about Drug Enforcement Administration raids on medical marijuana clinics Paul said, "They're unconstitutional", and went on to advocate states' rights and personal choice: "You're not being compassionate by taking medical marijuana from someone who's suffering from cancer or AIDS ... People should have freedom of choice. We certainly should respect the law and the law says that states should be able to determine this." 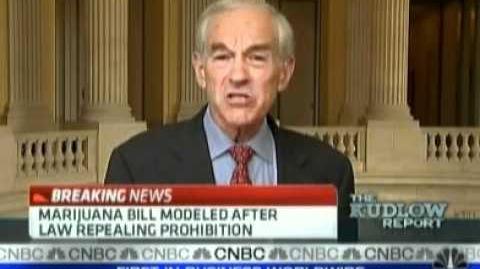